International bandy returned to the Roseville Oval on Saturday, January 9th with the annual Can-Am Bandy Cup match between Team USA and Team Canada. For the USA National Bandy team, the game could not have come soon enough as they were anxiously awaiting the opportunity to play a tough Team Canada squad that came down from Winnipeg, Manitoba. After losing to them for the first time ever last year, the American were hoping they could have some redemption. In last years’ Can-Am, Team Canada stunned the bandy world by upsetting both Team USA and the USA Development team. The scrappy Canadians were looking for similar results this year but the USA team had a much different approach this time around as they would not be taking their opponents lightly.

As expected, Canada tactfully sat back in a dense pack of players, challenging the Americans to attack. The Canadians’ strategy was to wait for the faster American team to try and break through several players and then capitalize on turnovers. Just like last year, this strategy worked like a charm for them as Canada went up 2-0 and a sense of Deja-Vu seemed to set in for the Americans. However, this time around the USA team was patient, and USA coaches Chris Halden and Mikael Sandberg made a few important tactical adjustments to allow the Americans to get deeper into the zone.  This change in strategy resulted in 6 unanswered goals.  Peter Knutson got Team USA going with a great pass from newly elected Captain Mike Carman.  Dave Martinson added a corner stroke blast followed by a goal by Mike Carman. Peter Knutson and Dave Martinson added one more goal each and the USA scoring was completed on a spectacular end-to-end rush by Mike Carmen making the final score 6-2 for the elated Americans. For his two goals and leadership, Carman was selected Player of the Match. Head coach Chris Halden was pleased with the Americans comeback win and felt the game was a perfect test to get ready for the upcoming world championship in Ulyanovsk, Russia. 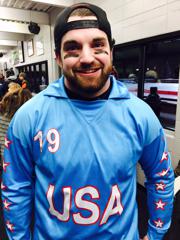