Bandy is played on an ice surface the size of a soccer field. It is best described as field hockey on skates. Each team is made up of 11 players including a goalkeeper.
The aim of Bandy is to score goals by hitting an orange or pink ball the approximate size of a tennis ball into the opposing team's net with a curved stick four feet in length. Depending on how the player strikes the ball with the stick, he or she can put a spin on the ball, making it curve, knuckle or dive. The ball has a cork center and a hard rubber cover.
The goal measures 7' x 11.5'. While the goalkeeper wears more padding than other players, he or she does not use a stick. Goalies are the only player allowed to use their hands to control the ball. Games consist of two 45 minute halves. A ten minute interval takes place at half-time when the teams change ends. Ties are broken with 15 minute overtime periods. The rules of bandy are very similar to the rules of soccer.
A variation on bandy is rink bandy. Rink bandy is played on a hockey rink with four skaters and a goalie. The rules are generally the same as those for regular bandy. 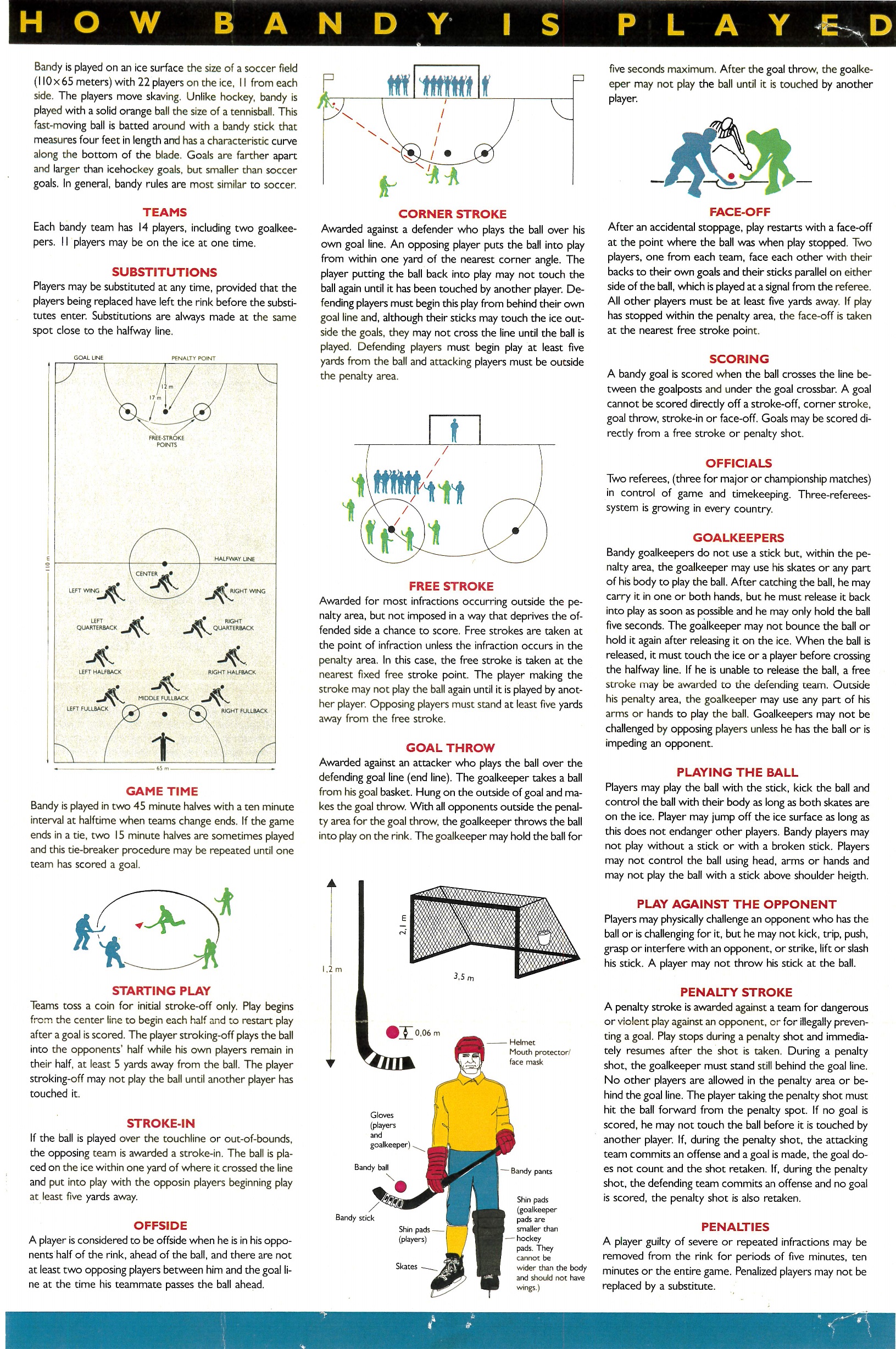 How Bandy is Played (Information graphic)

Bandy was being played in northeast England in the mid 1800's. Bury Fen, England, is considered the home of modern bandy. Cave paintings in Egypt suggest that a game similar to bandy was being played there 4000 years ago. The word bandy is Welsh in origin and means "a curved stick". The National Bandy Association was established in England in 1891. The NBA was the first governing body of Bandy and the first to develop official rules for the game. Prior to the founding of the NBA teams established the rules before matches started.
The first international Bandy match took place in 1891 between England's Bury Fen club and Haarlem of the Netherlands. Bandy was introduced to Sweden by a Bury Fen player in 1894. Bandy soon caught on throughout Europe. Switzerland, Germany, the Netherlands, Russia, and Norway all became active in bandy. Between the 1890's and 1955 no formal governing body for international Bandy existed.

2004 was the first year for the Women's World Championships, with the Women's tournament currently played every two years.

1973: First discussions between the International Bandy Federation and the American Softball Association regarding sport exchange to help introduce Bandy into the United States.

December 1979: Bob Kojetin builds Lewis Park Bandy Rink in Edina, Minnesota and the first Bandy game in the U.S. occurs there between the Swedish Junior National Team and Swedish Elite Club Brobergs IF.

December 1990: First youth program begins in the U.S. at Lewis Park in Edina.

March 1992: U.S. Women play internationally on the big ice for the first time at tournament in Ljusdal, Sweden.

February 1995: Magnus Sköld is Tournament Chairman, as Bandy World Championships are held for the first time ever in the USA, at the John Rose Oval.

January 2010: Steve Nelson completes his USA National Team Career with a goal vs Canada on January 30 making him 3rd in scoring all time among all players in Bandy World Championship history with 76 points. His first goal was in 1997 World Championship on February 8 vs Norway.

March 2014: First USA youth bandy championships held for U17 and U 15 Boys and Girls.

February 2016: Rick Haney competes in his 20th World Championship, the all time record among all players, in Ulyanovsk, Russia.

February 2018: US Men's National Team defeats Norway for the first time. 3-2 in the World Championships in Khabarovsk, Russia

BANDY REFEREE ADJUSTMENTS DUE TO COVID_2